Living in Colorado, I am occasionally asked to shoot a Log Cabin-type home.   We have quite a few of these in the foothills above Denver and in the surrounding mountain towns.

When I hear the word “log cabin” I am immediately hit with a slight dose of anxiety as these are, in my opinion, some of the most difficult types of interior spaces to shoot, especially if there are big windows with views.

Cabin interiors are tough for a number of reasons:

In short, you need some seriously powerful lighting and somewhere to bounce it off of (as we all know, or should, direct flash results in..well, flashy looking photos.  Bounced light is softer and much more appealing). 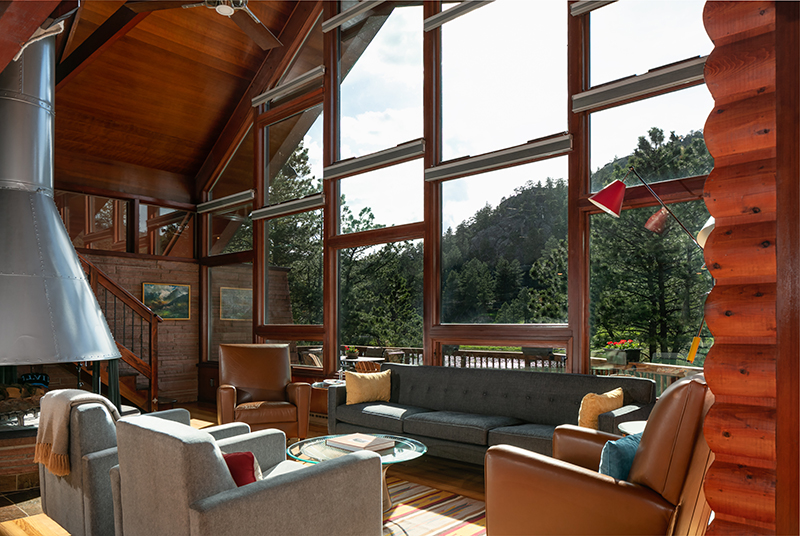 This shot from a cabin early in the summer was incredibly challenging.   I had direct sun blasting into the huge windows, and very dark wood.   Behind the camera was an open kitchen, so nowhere to bounce light.

How I shot it was by having a shoot-through umbrella directly to my left to help fill light in to the room.  I had some additional flashes on 9′ C-Stands on either side of the camera bouncing as much light off the ceilings as to fill the room.   This is not ideal, I realize as it can lead to color cast issues.  In this case it wasn’t too bad.

I then took a bracket of ambient shots, and attempted a window pull by blasting as much light as I could directly at the windows.

I’ll be honest, the post processing on the windows took a while.  There was a lot of glare and reflection, and this was probably the most challenging part of the shot. I don’t like to use the pen tool to isolate windows and then masking them in, but for this one I had to in places.

This one was a little bit easier, but still a challenge.   There were several different tones of wood, and nothing to bounce light off of.

How I shot it was by (as always) getting a bracket of ambient-only shots.   I then held a small circular reflector camera left near the top corner of the room and with my other hand, I bounced a flash off of it into the room.  I had my camera on a 2 second timer.  This filled the room with enough light to bring out the details.   On a smaller room in a log-cabin, this technique can work reasonably well.

The circular reflector I use is similar to this one: 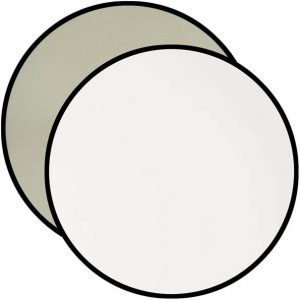 With a small reflector, I can hold it in one hand, and a flash in the other and bounce light into the room. Camera on a 2 second timer.

Lastly, I did a standard window pull in darken mode, which worked out on this one without too much fuss.

All of it blended with one of the ambient shots (Flambient method) to give it a more natural look.

How would YOU shoot it?