When I started doing Real Estate Photography years ago, I realized that there would be some degree of trial and error.   I was pretty comfortable with a camera but by no means a pro at the time.   I knew I still had a ways to go, and that there would be hits, and misses.

I fully realized that the technique would be a steep learning curve with continuous refinement.

I was aware that I was starting with the bare minimum in terms of equipment, and that would be a collection, and learning process too.

These things were givens – and now that I have quite a few years under my belt as a full-time shooter of ‘spaces’ – I can, with clear hindsight, recall many of the unexpected “Rookie” mistakes and blunders that I made – and have hopefully learned from.    I’ll list many of those here, in hopes that you (the up-and-coming, or brand-new Real Estate Photographer) – may learn from them and hopefully avoid them altogether.

Rookie Mistakes to Avoid as a Real Estate Photographer

Accidentally leaving your camera shooting in .JPEG instead of RAW.

I am now in the habit of looking at this setting frequently on my camera.   I had the unfortunate experience of somehow, during a shoot (and more unfortunately at the beginning) accidentally switching the RAW setting to .JPEG without noticing .JPEG small to be precise.

It wasn’t until I got home that I realized this disastrous mistake.

What’s the big deal?   Anyone who has ever tried to edit anything in .JPEG will quickly realize that you can’t pull it off with acceptable results.   Bringing up shadows, color correcting, pulling in windows, lens corrections – all gone.

When your client expects the best from you – there is no way you can fake it with a .JPEG.

I was lucky though.  The property was vacant, so I offered, and did go back and reshoot the entire thing.    I have since not made the same mistake.   If I had made this mistake on a million+ dollar luxury home that was occupied – I would have probably lost that realtor for good.

Having Plenty of Backup Batteries

In the beginning, I’d go to a shoot with one battery.  I was confident (or cocky perhaps) that the battery would get me through a shoot.   This worked until it didn’t. 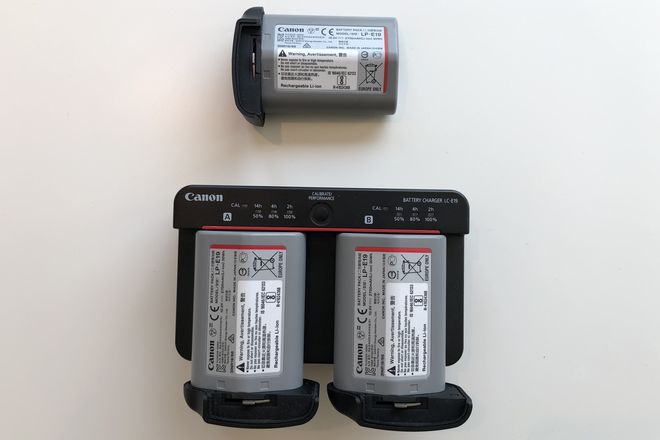 There is NO excuse that will work if you can’t shoot any more due to not enough battery inventory.   Two backups is the minimum that I carry.   Especially if I have multiple shoots in a day.

I also carry a portable charger.  If I arrive at a second shoot, I’ll recharge the battery I used on the previous shoot while I am shooting, just in case.   I also have a car charger and often will charge batteries en route between shoots.

Remember too, that cold weather will seriously compromise the shooting life of your batteries.  Another lesson I was reminded of just yesterday.

Relying on Memory for Calendaring

In the beginning, it was pretty easy to have someone call about a shoot, and just respond with “I’ll be there Thursday Noon.”   Back then, I only had a few shoots a week and it was fairly easy to remember.

But, if you are like most photographers (hopefully) you’ll start to get noticed, and busier.

I was at a shoot about a year into it my ‘career’ and had the drone in the air when my phone started ringing.  I couldn’t answer because I was flying but I saw the Caller ID and knew immediately – I had double booked a shoot, and she was wondering where in the &^%$# I was.   I had relied on memory, and it failed. 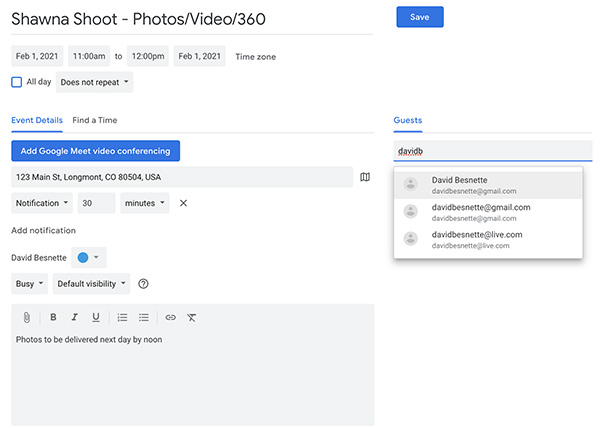 I live by the words “If it’s not on the calendar, it’s not happening”

I apologized PROFUSELY, and offered her a highly upgraded package for free to reschedule.  She was pretty cool about it, but it was very, very embarrassing.

Never again would I rely on memory.  I now use Google Calendar, and I include the realtor, and often the clients (and my wife) in the invite list for each shoot so each person gets a copy of what I put on the calendar, and will get notifications of any updates or changes.

This also helps for when I occasionally screw the calendar up and put something on the wrong day.  More eyeballs looking at the invite will help me to correct things.

Pro-tip: learn to put things on the calendar immediately, on the fly, from your phone.   I sometimes have requests get buried in email if I wait too long.

Not having a Backup Camera

This is a more expensive “fix” but necessary if you make Real Estate Photography your bread and butter.

I have a 1dx Mark II for photos and video, and also a 5dsr that I use as my main photo camera.   I can get away with either one of them if one should break.  There are tradeoffs – the 5dsr only shoots video in 1080, and the 1dx photo quality is not quite up to the 5dsr, but both are completely acceptable backups for each other.

This investment paid off twice this year, for the same reason.   First it was the 1dx that went.  The Tripod-plate thread at the bottom of the camera stripped, making it essentially useless for Real Estate Photography. 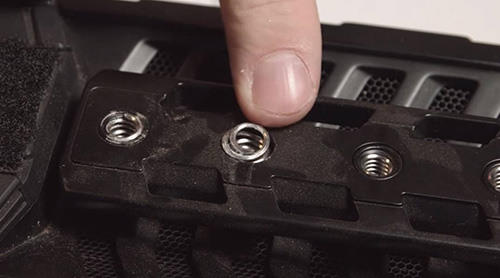 This was when Covid-19 was just getting serious and all of the repair shops in town were closed.  I had to send it back to Canon, and it took over 2 weeks to get it back.

This exact same thing happened to my 5 DSR last month.  Same routine to get it fixed, but I had a backup, and that saved the day.

Not recording to Multiple Cards

Most cameras nowadays allow you to record all images and video to multiple cards, in-camera.    It goes without saying that cards will eventually fail, and again, having a backup will save the day.

If you don’t have a camera that records to multiple cards, you’ll need one if you ever plan to get serious with Real Estate Photography. 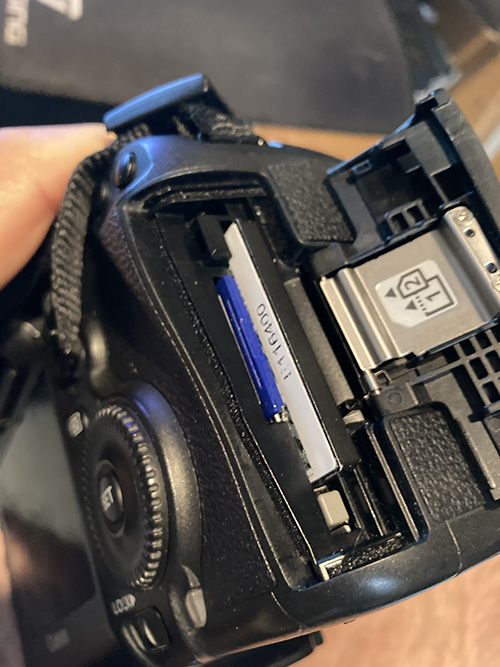 Both of my cameras record to multiple cards

In addition to cards failing, I’ve also taken a card out, and it fell out of my pocket.   I eventually found it but can you imagine if I hadn’t, and also didn’t have a backup?

Not Backing Up to Multiple Drives (and the Cloud)

This one is a no-brainer, but also one that’s easy to get sloppy about.   I heard someone say that “1 backup is none, and 2 is one.”  Basically meaning don’t even count on one backup.

I have a MacBook Pro.  I never rely on the on-board memory.  I have multiple external hard-drives and when I get home from a shoot, I’ll save all of my data to both externals immediately.   I’ll also leave the photos on the camera card for as long as possible.   Having high capacity cards for your camera will help with this, and also having a handful of cards to rotate through is useful too if one fills up. 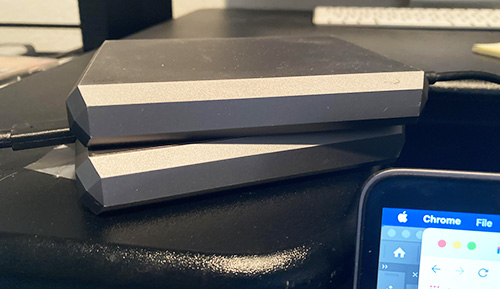 I have had it happen – always when I am super busy, and tired, where my computer will crash, or some technological triple-whammy will happen.     Being obsessive about backups is critical.

CLOUD BACKUPS – I have one of my external drives that will automatically backup to Google Drive, so my data is always in the cloud too.  This takes some management as data costs money, so deleting files after it’s safe to do so from the Cloud is part of the regular maintenance.

Not Setting Clear Expectations and Boundaries with Realtors

This is one of those things that never appeared on my radar when I started.  I thought it was simple – shoot a home, and deliver photos.  Oh, and get paid.    Nothing could be further from the truth.

Real Estate is a chaotic, emotionally charged industry.  Everything changes all of the time, and things get mis-interpreted, forgotten or assumed.  This is one of the hardest things about Real Estate Photography to me.

As the photographer, you need to “Reel your Realtors in” at times and be almost annoying about setting boundaries, and expectations.  This includes:

I struggle with this all of the time, still.  Even though I am as clear as the sky is blue about things – they are often forgotten, or overlooked by the realtor and/or sellers. 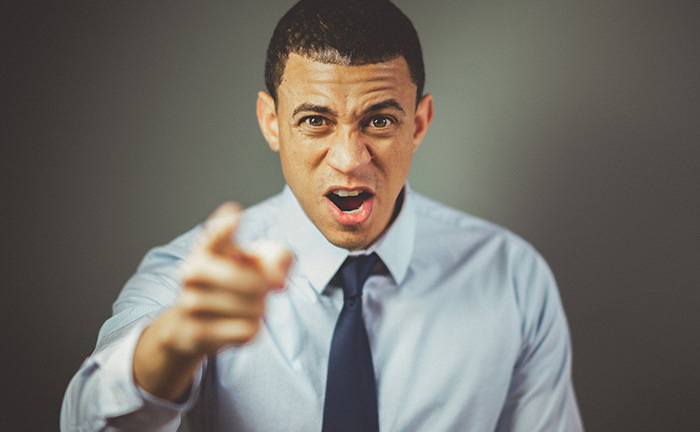 Photo by Craig Adderley from Pexels

This results in a constant game or rescheduling, defending weekends or family time, scrambling at the last minute, or producing sub-standard results from being rushed, or the house not being ready.

What I thought I was getting into is wildly different than the reality of Real Estate Photography.  Yes, at its core, we are taking pictures, creating art, and marketing a product.

However, it’s also a huge, constant marathon for the brain to remember everything you need to do; to maintain all of your equipment; manage expectations and emotions, and at the end of the day, bring home some income.

It’s not easy, but it’s extremely rewarding when you make it work.

I am still learning every day.   There’s not a shoot that goes by where something doesn’t surprise me, or where there’s a new challenge to figure out.

When I stop learning, maybe I’ll quit and do something else, but for now, I’ll be happy that I’ve made some money, as well as some mistakes that I’ve learned from along the way.

How Would YOU Shoot It?